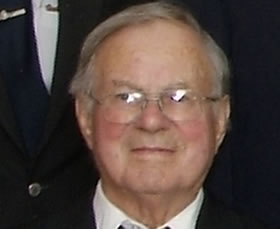 It is with great sadness that Marshal Smuts Shellhole has to inform: 19488 Moth Derek McLean has answered the Sunset Call earlier this morning and has gone to meet the Higher Command.

Born on the 20th of January 1922, Moth McLean served with Bomber Command, 115 Squadron RAF as a Rear-Gunner on the Lancaster’s and completed 30 tours of duty over Europe. A veteran of the D Day landings, Moth McLean also volunteered to serve in the Far East and was in New York City on leave the day President Franklin Roosevelt died.

He immigrated to South Africa during 1965 and served at Overlord Shellhole before transferring to Marshal Smuts during 1998. A Life member of the Royal Air Force Association, Moth Derek will be missed by all who knew him. Known as a man with a great sense of humour and appetite for life, Moth Derek departed wisdom wherever he went and truly lived for the Three Ideals of our Order.