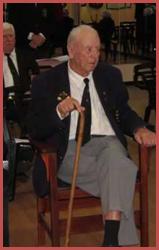 The aforesaid meeting was indeed a very special occasion in the history of the Shellhole! In the presence of Provincial Old Bill, Moth Dave Revell, the Shellhole presented special awards to long serving Moths Malcolm Bouwer and Pierre Olivier.

As he is the only serving Moth who actually knew founding Shellhole Old Bill and Old Bill of the Order (1963/64) Moth Johnny Farrell, Moth Malcolm sat for the meeting in the Old Bill’s Chair, donated by Moth Farrell’s family during February 1973.

Moth Malcolm, who joined our beloved Order in March 1946 at Packdrill Shellhole in East London, at the age of not yet 20, celebrated 50 years of loyal service at Marshal Smuts. Malcolm transferred from Three Dice Shellhole in Northern Rhodesia to Marshal Smuts during September 1965 and, has throughout the years remained a loyal servant to the cause of Mothdom. At the age of 89 Malcolm and his lovely wife Patricia, regularly visits the Shellhole to enjoy True Comradeship and the odd glass of the fruit of the vine! Life Membership of the Shellhole and the Comradeship Badge were presented to Malcolm during November 2010 and 2011 respectively.

As quoted from the original meeting minutes, Moth Pierre Olivier was marched in and inducted at Marshal Smuts Shellhole on the 15th of September 1980. For more than 10 years Moth Pierre served as the only 3rd Generation member at the Shellhole and in that period he attended the 1984 MOTH Convention in Windhoek. During this Convention his roommate was Moth Bennie McGee, a 1st World War Veteran who served at Plum and Apple Shellhole Paarl. Moth Pierre fondly recalls how the two of them would drink a couple of Whiskeys every night, especially brought along for the occasion by his roommate. For his loyal services to the cause of Mothdom, Moth Olivier has been awarded the Comradeship Badge (July 2010) and the Excellent Service Badge (March 2013).

In the words of Carl Gustav Jung: “You are what you, not what you say you’ll do.” Earlier MOTH Service awards were presented to Moths George Mann (10 years) and Angus Walker (15 years).
We use cookies on our website to give you the most relevant experience by remembering your preferences and repeat visits. By clicking “Accept”, you consent to the use of cookies.
Accept
Manage consent