The Memorable Order of Tin Hats or the MOTH as it is more popularly known is an ex-servicemen and woman Organisation founded in Durban, South Africa, on  May 1927 by a remarkable man Charles Alfred Evenden by name. He was born in London on the 1st October 1894 and as a young man emigrated to Australia and served with the Australian forces at Gallipoli during World War I where he was wounded and evacuated to England. After convalescence, he returned to Australia, and was discharged  from  the army.

Witnessing the annual ANZAC parades, Charles Evenden turned his thoughts to the formation of an association of front line soldiers to perpetuate the comradeship gained from front line service. Later, he settled in South Africa where he worked as a cartoonist on the staff of the Mercury, a morning paper in Durban, under the pseudonym of “EVO” by which name he soon became popularly known to most people.

In 1927 he saw a war film that  included  an impressive  scene of marching  troops  wearing  steel helmets  (commonly called tin hats), and muddy uniforms,  all carrying  trench  equipment.  Looking at the scene, it madehim wonder  what had become of his comrades  in the army; where  they were and what  they were doing. Thisline of thought  inspired  a cartoon  illustrating  Forgetfulness   of comradeship  that  had apparently   ceased toexist. From this one idea other  ideas came to the fore, then discussions with  colleagues  and friends  and, eventually,  the founding  on the 7th May 1927 of an ex-service organisation   known  as the Memorable  Order  ofTin Hats or simply  MOTH.

The Order is based on concord and harmony and operates independently of race, religion or politics in the same way as front line service, but with full democracy.

T.C.  (True Comradeship) by practising front line friendship in civilian life;
M.H. (Mutual Help) by acknowledging the personal and collective obligation to help each other as in front line service;
S.M.  (Sound Memory) by remembering the fallen as a living companionship and to serve their memory in practical actions
which rise above divisions of social status, race, or politics.

To protect and advance the interests of war veterans and their kin by carrying out benevolent activities of an ex-service character.

The centre of the emblem of our Order is the Tin Hat, hallowed by the Light of Service. Our complete emblem includes the crossed rifles of sacrifice, surrounded by 12 stars that signify Mutual Help, the whole within an unending circle, expressing life and harmony without end 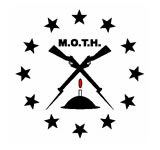 The Moth consists of the following:

In proud thanksgiving let us remember our departed brethren.
They shall grow not old as we who are left grow old,
age shall not weary them,
nor the years condemn.
At the going down of the sun and in the morning,

WE WILL REMEMBER THEM.

From a Poem written by Lawrence Binyon, named “For The Fallen”

No little child will ever starve or suffer needless pain,
The aged will live their twilight years in sunshine, not in rain,
The crippled we will help to walk, the blind we’ll help to see,
The wonders of God’s handiwork in all its majesty.
To feed, to clothe, to build again, where hopes should shattered be,
This is the crowning MOTH ideal, to help humanity.

When you go home – tell them of us, and say
“For your tomorrow, we gave our today”.

Their gift was great, but you must give
A greater to complete the plan,
They died, now you must nobly live,
To make man brother unto man.

I shall pass through this world but once,
Any good thing that I can do
Or kindness I can show any human being,
Let me do it now and not defer it,
For I shall not pass this way again.