Secure comfortable accommodation is available in a “Visitors Cottage” for Moths / Mothwa looking for accommodation for a few nights. Accommodation consists of a bedroom and a shower, but no meal facilities. For further details contact the Custodian, Richard Sewell 0788185007 or [email protected]

These Cottages were initially in the area called Cottesloe, next to the Gas works, Auckland Park. As a result of the Johannesburg City Council planning to build a road through the middle of the complex, we were offered a long term lease where the cottages currently stand in Fairlands.  The complex was build in phases, firstly 18 double cottages to move the persons from the old site. 5 years latter, 12 single cottages were built as a result of the demand for single accommodation.  This demand continues today, and have since built another 4 single cottages, being a total of 16 single cottages.  All Cottages were built to accommodate persons in wheel chairs. We also made sure the complex is low maintenance, i.e. outside walls all face brick, no  gutters etc.

We house 56 Moths and ex-servicemen and their spouses. (Military service is a prerequisite)  We offer residents, whom are predominately Moths, safe, affordable housing. Residents have to be able to look after themselves, as we have no medical facilities. We do not offer transport to the shops, hospital etc. We are very concerned about the safety of our residents and therefor make sure we have done all that is possible to make sure the complex is safe, eg Electric fence all around the complex, linked to armed response Beagle Watch, all doors have security gate and windows have burglar bars.

In addition the complex has free Wifi for its residents. We have a laundry with Speed Queen washers and dryers. The complex also has a hall for entertainment which doubles up as a shellhole. Currently we have West Rand District and  2 shellholes that meet monthly in the Shellhole, being Last Post shellhole and Oasis shellhole. In addition Moth WestRand District,  Warrior Oasis Cottages management committee and the Royal Navy association, have their  meetings at Moth Cottesloe Homes. Our facilities are also used by the local rate payers association.

The residents are very active in the complex and on a regular basis their are functions arranges in the hall for entertainment. These vary from Bingo, Video evening, prayer groups, dances, or just a quiet drink and braai with friends on a Friday evening.

The scheme has a long waiting list particularly for single cottages. Our preference when allocating Cottages is to look at needy persons, who have been Moths for 3 – 5 years or longer.  We will there after look at Ex-servicemen and woman. Health is critical so only applicants whose health state is good / excellent will be considered. To obtain an application form, mail [email protected].  Once filled in and returned with your application fee of R100, will your name be added to the waiting list. Note rental is based on a means test, i.e. a percentage of your income which is declared annually.Electricity and Water are pre-paid.  Regretfully, NO PETS.

Once again the Management committee arranged a lunch for the residents of Moth Cottesloe Homes. A very big thank you from the management committee to Mary Anne and her little elves who sorted decorated, arranged sponsorship, cooked the vegetables and generally made sure the day was a great success. All a big thank you to all the residents  who had a part to play on the day. The meat for the day was a spit braai with 14 kgs of Beef and 14 kgs of Pork which was brilliant.

Thanks to the Chairman of Property Management Committee (PMC) David Gush and the Provincial Old Bill Dave Berry and good wife who also attended our day. We thank them for there support over the past year.

Pictures of the Braai.

Before the Braai, we remembered this who had answered the Sunset call and whose plaques needed to bw added to the wall of remembrance.

In November 2019 Moth Cottesloe took the decision to migrate all cottages to Prepaid Electricity. The reasons behind going this route is:

The exercised has proved to be well accepted by the residents in the complex. We thank “The Meter Man” for their assistance in ensuring this project went ahead seamlessly. We are now investigating doing the same with water in the next 6 months.

Moth Cottesloe annual Fete and Jannie Smuts Parade takes palace at the cottages.Looking for a Stall – contact Lenard Wynne  [email protected]  or  0822986976 Fete starts at 9h00Parade : 11h00 – 11h30All Military Veteran Associations are Welcome and may carry their Standards.Only one Wreath will be laid. Well the fete was a roaring success with probably our best attendance and a lot of new faces. This fete is arranged by the residents of Cottesloe Homes, and  and they put a lot of hard work into arranging and making sure all goes well. A big thanks to all who attended and to all our sponsors. Without you the day would not have been a success.  At the end of the day we made just over R40000 which will be put to good use my the management committee. The management committee of Moth Cottesloe Homes, hosted it annual Christmas Lunch at Cottesloe with a spit braai, which has become a tradition over the years. There were over 90 persons who attended, the majority being our residents. Also in attendance were members form Oasis Shellhole and some senior dignitaries from district, Province and the National Executive. A big thank has to go to Mary Ann and Richard for the organising that took place. The hall looked stunning, and for this we need to thank Joyce Watkins, Sharon Rabe and the Grandsons.  Thanks to the ladies that assisted with catering. Last but not least, thanks to the management who arranged and did the spit braai and carving.

Cottesloe Homes has recently provided Wifi internet connectivity to all its cottages and the recreational area. The purpose of the Wifi is to provide a free basic service to the tenants allowing them to have basic connectivity for whatsapp, mail, and general internet. This now gives our tenants that could not afford expensive data bundles to enjoy the internet, and those who did buy data from time to time to use the money for something more essential.

This has all been possible due to the support that we received from Qkon, and engineering company  that designed our network, arrange excellent quality equipment, ensuring the service was affordable to us. They then did the install at their cost. Our aim was to install a fibre link, but when we ran into difficulties. Qkon then arranged a satellite installation for us, a new product called Twoobii which was launched the end of last year.  The service has been live since Mid December and the tenants are very appreciative of this new offering.

Fibre went live in February 2019, making more bandwidth available to our residents. A first for Moth Cottages, thanks to the support of the Qkon team and Twoobii. 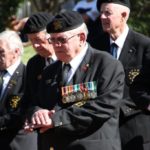 It is with regret that we advise that Moth Reg Lotter, the Secretary of Moth Cottesloe Homes has answered the Sun Set Call at the age of 77 years young. His dedication, commitment and love for Moth Cottesloe Homes will be always be remembered. He was a very devoted Moth, who  gave all his time to the the Moth when he retired from Beagle Watch, a security company that today still looks after Moth Cottesloe Homes in a very special way. Val – Our thoughts are with you at this Time – Moth Cottesloe Team  and residents.

The residents came out in their droves to see all this unusual activity in their complex.

The residents were accustomed to seeing ambulances in their streets but not police vehicles.

The new custodians, Richard Sewell and his wife Mary-Anne were quick to quell any negative perceptions.

Yes, the police were there but for a positive reason, they came to celebrate Mandela day with the residents and brought many gifts, blankets, food, winter coats and for the drinks residents.

Two DA ward councillors were also present, Amelia Bester from the Weltervreden Park area and Beverley Weweje from the Fairlands ward, they made sure all the proceedings went well for the Fairlands branch of the South African Police Services and their supporters, which included, AfriSam, Spar, Pick n Pay and a host of unnamed sponsors.

The residents of Cottesloe were treated to a wonderful day of fun, food, gifts and interacting with the people who protect and work for them around a braai organised by the men and women in blue. Everyone received a boerewors roll to warm up the cold weather.

This is an event many will cherish in their hearts for a long time to come.

Thank you SAPS and all your supporters for a great day.

Cottesloe has celebrities living in their cottages.

Morgan Hunter and his wife, Barbara were watching the news on TV when they saw a resident of Cottesloe on the small screen.

“I could not believe it when I saw Rod Knight on the sport segment of the news. He was sitting next to a very pretty woman. I hope his wife, Gisela did not get jealous,” quipped Barbara.

When questioned if this was true, Rod said he was at a press conference to announce the Athletix track and field series, which Usain Bolt, the world’s fastest man, came to promote when he was in South Africa.

The other celebrity is Marc Haley, president of Linden Bowling Club.

He was on the front page of the local newspaper, Northcliff Melville Times.

He was complaining about the pollution behind the bowling club’s property.

Marc invited the local press to come visit the heritage site, next door to the bowling club, which has become a dumping site.

Emma Park is divided into two parks, one used mainly by children and the other a nature reserve heritage site. Home to the Johanna van der Merwe monument in the area.

Haley explained that he reached out to City Parks as well as the area councillor.

“It’s gotten to a point where clean ups of the site just don’t work, because the recycle people just come back and dump and burn rubbish again”.

The one suggestion was that the area be fenced off, just like the Melville Koppies, gated and preserved.

A very successful day at Cottesloe Homes. The Residents at Cottesloe Homes put in  a great effort with the fete and were well supported by moths from surrounding districts. The Jannie Smuts Parade conducts by Moths Wilson and Gradige was expertly done and certainly attracts person to the function. Thanks to all the sponsors and supporters. An amount of just under R30000 was raised for the Cottesloe Cottages, one of the flag Ships in the MOTH.