MESCA Lowveld Branch is a Unit of the MOTH Lowveld District and is managed by a committee which is representative of all the Shellholes in the District.
The MESCA Lowveld cottage complex is essentially a retirement village which provides accommodation for indigent retired ex-servicemen, ex-servicewomen and/or their spouses without the full recovery of costs.
The facility consists of 18 self-contained stand-alone residential units or cottages. 7 of these are single units intended for unmarried persons and the balance of 11 are double units intended for married couples. Every unit contains its own bathroom and kitchen. The single units are approximately 35sqm in floor area while others are in the order of 48sqm.
Besides the above accommodation units, the complex also has many covered carports, storage rooms and a workshop. At this time, one of the single units is used as an office for the Administrator.
The entire complex of 4,800sqm in ground area is constructed on the property of Legogotu MOTH Shellhole located between Russell and Rothery Streets in Nelspruit and is on the South side of the Shellhole. The complex is surrounded by a steel palisade fence and is accessed through electric-motor operated sliding gates from either Russell or Rothery Streets.
The MESCA Lowveld Cottage complex provides a well-maintained, secure and affordable facility with pleasant surroundings and attractive gardens in which the elderly can live out their lives with dignity in peace and harmony. 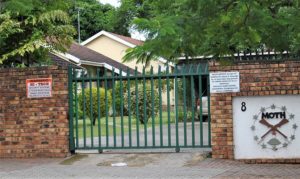 Our early history has been carefully researched and collated by Moth John Taylor, a serving member of Legogotu Shellhole since July 1981 and the Scribe of the MESCA Lowveld Management Committee for some 15 years.
Our cottage scheme owes much of its existence to the efforts of a few stalwarts most notably the late Moth Bernie Friedlander and Moth Fred Naudé.
Bernie was a firm believer of the principle of getting on with the job and apologizing afterwards. Although this attitude got him into hot water on many occasions, it did serve in achieving two of his ardent wishes; to get a permanent home for Legogotu Shellhole and to create a housing complex for retired and indigent ex-servicemen. To realise these ambitions, astute and firm leadership as well as lots of money was needed. Below is a transcript of letter written by Bernie Friedlander to Provincial Old Bill Frank Bingham on 6 September 1984:

“Dear Old Bill Bingham
As promised here is a history of Legogotu Sound Memory Cottage Scheme.
In 1959 the Shellhole was penniless As the Pay Bill absconded with all the funds over a period of 3 years and the books were not audited for that period.
The auditor called in to examine what was entered in the books traced an amount of £333 but no en-tries had been made for a period of 3 years.
We wrote to the Three Arms Shellhole and they sent us a cheque for £333.
In the meantime we had collected enough money to buy an erf for £500.
Soon after this the Hervormed Kerk decided to sell their church and we decided to buy it with the erf we had plus £1,700.
We spent a lot of money improving the hall and when everything was paid up we bought the house next door for £11,000. We borrowed money from the Allied Building Society to do this.
After we had paid this house off, we looked around. Our Hall Bill was accommodated at a very low rental. He was an old sailor in his nineties and lived with his daughter.
We then bought the house behind the Hall Bill’s house, and paid back the money borrowed from Sound Memory Cottages. This house cost £17,500 and we let it out.
Once again we went into debt by buying the house behind the hall for £23,500 and duly paid it off.
We have been collecting funds since then with Film Premieres, Bowls and Golf Days and a big Food and Drink Fair sponsored by Pick ‘n Pay.
We have consolidated our four erven into 1 erf of ±6,000 sq. meters on a prime site in Nelspruit which is zoned for High Density and is very near Shopping, Churches and the new Council Complex a block or so away.
At present, we have R86,500 in the Kitty and would like to complete a complex of 5 x 1 bedroom and 5 bedsitters, which will cost us R224,000. If we can borrow the money to complete the 1st phase of the project we will be home and dry, and we are sure that as in the past we will pay back every cent.
This is an appeal for assistance as we feel if we don’t get off the ground now the public will lose interest in helping us.
Y.U.T.H.
Bernie Friedlander
Chairman MESCA Lowveld”

Bernie Friedlander did couch his words somewhat in his letter to the Province. In fact, the piece of land owned at that time by Legogotu Shellhole, plus an amount of £1,700, was swopped with the Hervormde Kerk who owned and occupied the singe erf on which the Shellhole now stands. This unilateral unauthorised action received a lot of criticism from Shellhole members as well the Provincial Dugout. However, as soon as it was found that it was a good idea and a sound business deal, the furore died down.
As Bernie correctly states in his letter, having acquired the first stand on which the Shellhole is sited, and flushed with the success of their venture, Bernie and his merry men went ahead with an unprecedented acquisition derby. Through blood, sweat and tears, they acquired three erven with houses adjacent to the Shellhole giving the Legogotu Shellhole ownership of four erven in total. The erven have since been consolidated into a single property of 5,949 Sqm with Legogotu Shellhole occupying one-quarter and the cottage scheme occupying three-quarters.
The early pioneers now had ground, a few ramshackle houses and a burning ambition to create a home for the elderly Moths and ex-servicemen of the Lowveld. The process had to be planned, financed and managed and to this end the first MESCA Management Committee was formed. This consisted of Bernie Friedlander, John Constancon, Fred Naudé, Peter Fouché, George Hendriks and John Taylor with Ron Louw seconded as the Architect and Dennis Quilliam as the Electrical Engineer. These were the stalwarts but many others were also involved in those halcyon days.

And then came 1985 – the first three cottages were built and ready for occupation and understandably, amidst much pomp and ceremony. An extract from the newspaper “The Lowvelder” of Friday 14 June 1985 tells the story: Since it humble beginnings, MESCA Lowveld has grown from the initial single “bedsitters” to what we have today. Along this development road, the three houses which were on the three properties bought by Legogotu Shellhole, were demolished to make way for the expansion. One of the double cottages now bears the name of Peter Cruze, a local businessman who paid for its construction. Another cottage commemorates Andrew Cresswell (Snr) who, on behalf of the Red Cross, paid for another double cottage.
Another significant contributor to our cottage development was Moth Fred Naudé who, feeling that the time had come for him to take up residence in the complex, paid for a large double cottage to be erected for himself and his wide Daphne. Despite being paid for by Fred, he still pays rent for the cottage and it will remain the property of the MESCA Cottage Scheme.
For many years, one of the original buildings on the property was used by the Moths of Legogotu as their Shellhole. Eventually, in 2016, the Moths moved to new premises next to the Shellhole hall and the vacated building was converted into two single cottages.
MESCA Lowveld sits on prime business development land and so it is not surprising that some years ago a very serious bid was made by a group of local businessmen to purchase the complex and in so doing, move the residents to an area on the outskirts of Nelspruit. Amidst strong opposition from the MOTH, the move come to nought.
One can only marvel at the tenacity, dedication and the energy of our Moths of those early years, who, faced with the challenges of their times, still forged ahead undaunted to establish what we today simply have to manage and maintain. However, therein lies our challenge today. We are facing dwindling numbers in our Order and fewer people to do the work. Funds are not as available as they may have been in the past and as our assets age, so the need for maintenance increases very much out of pro-portion to our income.
The Order is founded on the ideals of True Comradeship, Mutual Help and Sound Memory but our greatest achievement and visible expression of our ideals, are our Cottage Schemes. No matter what the future may hold for us, the MOTH, we must ensure that our Cottage Schemes are “ring-fenced” so that they will survive to continue the invaluable public benefit which they provide to the aged even if most them are not Moths.

Sunday 22 April 2018, our MESCA Lowveld AGM was held at Legogotu Shellhole. This occasion marked the end of the term of office of four of our stalwarts on the Management Committee and the installation of some new blood.
The MESCA Lowveld Management Committee has always been representative of the four Shellholes in the Lowveld District and this tradition remains.
With the retirement of Moth John Calmeyer, who was also the chairman, representing Jock Shellhole, we now have Moth Arthur Knoesen. Moth Deon Höll of Lone Tree Shellhole is replaced by Moth Andrew Diedericks. Moth JC Coetsee of Legogotu Shellhole has now been appointed as the District Old Bill and so is replaced by Moth Corrie Janse van Rensburg. Finally, Ben Engelbrecht from Mpumalanga Shellhole has been replaced by Moth Gerrie Scheurkogel.

And so we move forward into another year in the life of MESCA Lowveld.