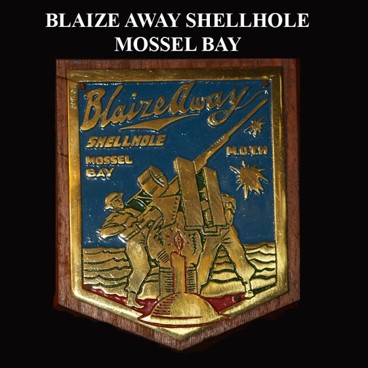 News Letters and links of interest.

Blaize Away was very active this year with Remembrance activities.

01 February 2020: The Diaz Festival & The Blaize Away Shellhole’s float entry.

Planning for Blaize Away Shellhole’s float entry began as early as November 2019 and from the onslaught there were those that thought it was a very ambitious project but as momentum grew so more and more MOTH’s came onboard and the rest of this report details our success.

The MOTH Blaize Away Shellhole’s float was based on a military theme intended to educate, unite & depict our contribution to the society everyone enjoys today, whilst paying homage to those who made the ultimate sacrifice for their country and it’s people

We received the basic structure around 15h00 on Thursday, which left us with a mere 44 hours to complete our float before judging commenced. It was decided it to split our troops/members into two teams; (1) a Frame Building Team and (2) a Cladding Team.

On Friday there was a flurry of fabrication-fever as the troops jumped into action, there was a great deal of cutting, grinding and welding and some challenges to overcome.

The first challenge was load shedding which quite easily could have wrecked our hopes of participating, but thanks to a sponsored generator, we were able to continue building

When Team 2 could start with the cladding the completed frame we experienced our second challenge as near gale force winds led to progress virtually being halted; as it became too dangerous to move sheets of hardboard. We had to quadruple manpower to prevent a “Mary Poppins” scenario.

Our third challenge was staving off total exhaustion and the expectation the police to putting a halt to our midnight antics, hence we temporarily suspended activities at 00h30 on Saturday morning. The diehard’s resumed a few hours later at 05h50.

It was an emotional and awesome experience to be part of as the 6,5m scale size Ratel was lifted and reversed by manpower into the road, ready for loading onto the truck. This was another teamwork effort, with all available hands on deck and wives cheering us on.

“We had quite an audience as the neighbourhood arrived, all keen to get involved in the festival euphoria”

With (literally) minutes to spare before judging commenced our float arrived at the departure point, where final touches were applied before the judges arrived.

Reflecting on our accomplishment, it was loads of fun and an excellent team building exercise, which brought out the best in our members.

Our post assessment indicates that the MOTH’s spent ±80 man-hours building the float excluding the ±50 man-hours on prep and support services.

We are aware that photos have been widely shared, good for tourism, a good public relations exercise and hopefully enlightening & stimulating interest within the community.