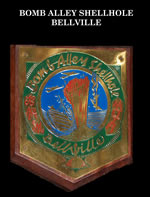 The EXCO was installed by DPOB Moth Leon Robertson

Bomb Alley Shellhole, in co-operation with the Bellville Sub Council of the City of Cape Town, once again hosted its annual War Commemoration Service at the Bellville Civic Centre, where a magnificent cenotaph proudly stands on which are listed the names of all those from Cape Town’s Northern Suburbs who fell during the two World Wars and also of those of the South African Bush War.

This years’ Service was marked by the restrictions in place due to Covid-19, but all relevant protocols were observed and, regardless of such restrictions, the attendees were witness to another excellent example of homage paid to our Fallen Comrades.

The Ward Sub-Council was represented by Clr Clive Justice, Old Bill Gail Jordaan and members of Bomb Alley and neighbouring Shellholes took on the necessary functions, and the Guest Speaker, Maj. Chris Mahon (British Army, rtd) presented an enlightening and informative speech to the Gathering.  The Caledonian Pipes and Drums provided the music and Emeritus Professor Chrisjan Cruywagen rendered the Last Post and Reveille in his usual professional manner.  Wreaths and Floral Tributes were laid by the Shellholes, the Cape Western Provincial Dugout and invited Service Associations.

The fact that this Service was such a success is as a result of good forward planning, effective communication and relevant functionaries being proficient at their allotted task.  The Service had been in the planning stages at the start of the National lock-down but this did not stop Bomb Alley from keeping the plans alive.  When the lock-down was amended to Level-2 status – a mere two weeks before the due date – the Shellhole kicked into a high gear and, although the attendance was lower than what would have been preferred due to Covid, the Service went on with fine precision and in full accordance to DMV-approved instructions.

Old Bill Jordaan and Bomb Alley Shellhole would like to take this opportunity to thank one and all for their contribution and assistance in making the Shellhole’s annual War Commemoration Service another one to remember!

On past Sunday, 18 March 2018 at 11am we gathered at the Bellville Cenotaph in front of the Bellville Civic Centre to remember those that had fallen during the Great War, 100 years ago.
During a short service the MOTH Credo and Prayer and Flanders Fields were recited. A lone piper( Pipe Major Tony Reis) played the Lament whilst those present laid poppies at the foot stone of the Cenotaph.
It is interesting to note that the Cenotaph, until quite recently, stood way off to one side of the property on a derelict weedy patch of lawn. Due to the efforts of Moth Brian Porter it was relocated by the City of Cape Town to it’s place of prominence in front of the Clock Tower and front entrance of the Centre.