At last Covid allowed some fund raising to take place and MESCA Dickie Fritz was able to hold their annual Fete and Sidi Rezegh parade. Both of these were well supported and was probably the most successful fete held by the Cottage Scheme.

The 2 September 2021 was a sad day at Warrior Shellhole as they watch one of their 2 tanks being transported to a new home at Mesca Dickie Fritz Cottages. This is all part of the preparation to sell the Warrior Property in Mulderdrift. We do thank Dickie Fritz as they take on the ownership of the Honey and add to their collection in Edenvale. Looking forward to seeing the Honey in a months time after it has had a paid Job and cleaned up.

Moth Jorge De Jesus was born on the 14th October 1967 and after attending Jeppe School for Boys he was drafted to 6 SAI – Grahamstown in August 1987 where he spent a month being acclimatised to Military life. In October 1987 he was transferred to 5 Signals Regiment stationed at Wonderboom in Pretoria.

From December 1987 to July 1989, he was stationed at 524TP in Phalaborwa. During this period he was also seconded to Military Intelligence stationed at Charlie Base during November 1988 to January 1989.

He is currently the Shellhole Sergeant Major and has been since 2012. He has also gotten involved with the MESCA Dickie Fritz side and is the current serving Secretary since 2012.

He has recently been appointed as the East Rand District Sergeant Major, a post which he also performs diligently.

He is a founding member is currently still a member of the South African Veterans Signals Association (SAVSA) which he is also quite involved with.

In general discussions with fellow MOTHs, Jorge’s name often crops up relating to the Shellhole’s status and activities. He is one of few Moth members that truly live up to the Three Ideals of the MOTH. From the day that Jorge joined the Order he was always willing to lend a hand wherever help was needed.

An evening with the General (Jannie Geldenhuys), Moths Neels and Ron at the Dickie Fritz meeting held on 6th March 2014. 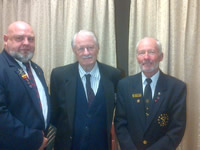 Thursday 1st August marked our AGM, so we were privileged to have as our special guests, two aficionados from Southern Gauteng District: Old Bill Trevor Scrimgeour and Sergeant Major Jimmy Frieslaar. We had a total of 64 folk in attendance, including Mothwa and visitors, and but for the 17 apologies, we might have had a big gathering.

Our own Old Bill Leon Apicella officiated over the induction of Buks Theron into the Order as a member of the Dickie Fritz Shellhole, and all present welcomed our new member into the Order, in true Moth fashion.

Our meetings are normally quite involved, because not only is our Old Bill also the Deputy Old Bill of Southern Gauteng District and Sergeant Major of Platinum Province, he is as well the MESCA Dickie Fritz branch Chairman. This means that he wears two hats at every meeting, but he has been known to leave his second hat at home at times. He’s right up there on initiative though, and we have him on camera substituting his ‘other hat’ with a different hair do. Mmmmmmm! Lekker Ding

Old Bill Leon and Sergeant Major Jorge gave us detailed feedback on the recent Platinum Province AGM, and of significance is that we were awarded the Provincial Recruitment Trophy for 2012/2013. That on the back of the District Recruitment Trophy we were awarded at the recent Southern Gauteng District AGM. We really are very proud of these two trophies, and it stands our Shellhole in good stead. Sadly though, one of our stand out members received an award that places a huge question mark over our integrity. Our very own much loved Old Bill Leon Apicella received another award, for the second year running nogal – the Bull sh**ers Wooden Spoon Award. SIES!

Of course we don’t tolerate defaulters of any sort, and so it comes as no surprise that both Moth Alex McKenzie our Paybil, and Moth Peter Allan our outgoing Wee Bill were brought to book. Moth Alex McKenzie had every man and his dog searching high and low for his badge collateral, when it turns out that he had it under close arrest in his room all the time. Moth Peter Allan does not read his emails! He sees them, he acknowledges them, but he doesn’t READ them. Both defaulters got their just reward.

When things go wrong they really do. The adjutant read out the charges against two more defaulters on the night: Moth John Gilbert you are charged with publically admitting to have torn up your minutes. This is totally unacceptable, because as any Moth knows, you ought rather to have used a pair of scissors. You are herewith issued with a personal pair, and your penalty is to wear them around your neck for the duration of the meeting, and harmony.

Moth Shane Simmonds, you are charged with the heinous crime of having the effrontery to breathe. Your penalty, as befits the crime, is to perform your pitiful rendering of the Prince Edward school war cry.

The Meeting reverted to sanity and was handed over to the District Old Bill to do the inductions of the new Shellhole Executive, and it is here recorded that the following were inducted for the ensuing 2013/2014 year:

The Executive re-appointed Moth Jorge De Jesus to the position of Sergeant Major.

The District Old Bill briefly outlined his views on the make-up and performance of the Dickie Fritz Shellhole, all of which was complimentary and encouraging.

We at Dickie Fritz were indeed privileged to have the Old Bill of The Order Moth Tony Munnik visit us for tea. On his way to the Platinum Provincial AGM, Moth Tony ‘popped in’ to a welcome by fifty plus Moths, family and friends. Moth Tony and the Dickie Fritz Moths, in full uniform, enjoyed tea, cake and other refreshments as appropriate, and a good time was had by all.

On behalf of the Dickie Fritz Shellhole, Old Bill Leon Apicella presented a casting of an Old Bill bust to the Old Bill of The Order, Moth Tony Munnik.

The casting and sales of Old Bill busts, together with other Moth artefacts is a Dickie Fritz initiative aimed at raising funds for the complex.

A comparatively uneventful albeit very pleasant meeting was had in July. We had 49 on parade at our Harmony Toasts, and it was noted that there were 24 apologies. A fitting tribute was paid to the late Moth Keith Anderson, Old bill of KBB Shellhole, who passed away suddenly and unexpectedly on Sunday morning 23rd June 2013. We will remember him.

This meeting Dickie Fritz featured the induction of four new members, so in accordance with the MOTH Constitution and General Standing Orders, four visitors, Earle Wayne Hunter, Stephen Victor Cooke, Kenneth Bernard Jackman and Cheryl Ann Grover, all of whom having attended at least three compulsory meetings, and who’s applications had been accepted by General HQ, were inducted into the Order as members of the Dickie Fritz Shellhole.

June Meeting. We had 58 on parade at our Harmony Toasts, and it was noted that there were 18 apologies. A good meeting!

All present remembered and paid tribute to the fallen and the survivors of D-Day, Operation Overlord, on the 6th June 1944.

In accordance with the MOTH Constitution and General Standing Orders, one visitor, Frank Guthrie, who having attended at least three compulsory meetings, and who’s application had been accepted by General HQ, was inducted into the Order as a member of the Dickie Fritz Shellhole.

During the meeting, the Sergeant Major called upon Moths Kelvin Jensen and Paul Chapman to be escorts for the Adjutant Moth Gus Mason who was charged for not leaving his files lying around at Dickie Fritz after the May meeting.

On the evening of 16 May 2013, Dickie Fritz Shellhole was privileged to host a group of old soldiers called 61 Mech, comprising ex serviceman who served on the border.

The 61 Mechanised Infantry Battaliion Group existed for just 27 years but in that short span of time it participated in no less than 37 large scale operations, earning a well deserved name as one of the finest fighting units in South Africa’s military annals.

General Roland De Vries, led the unit from 1981 to 1984. Apart from it being their regular ‘skourskuur’, they had invited the authors of 3 different military books to join them and present their books. General Roland De Vries who wrote Eye of the Firestorm, Louis Bothma who wrote Vang n Boer and Leipoldt Scholtz who wrote SAW Grensoorlog all attended. All in all 52 guests arrived and an enjoyable evening was had by all.

The Dickie Fritz monthly meeting on Thursday 2nd May 2013 At our meeting on Thursday 2nd May 2013, Moth Wally Ferreira was brought to book and charged with being the very best Barman and Complex Manager in the business.

On the left is Old Bill Leon Apicella reading out the charge, with Moth Wally cocking his good ear to the direction of the sound, and looking on pensively from the midst of the imposing escorts. Not sure if our Sergeant Major is fully au fait with the requirements of escorts. These two seem to have been dragged in off their Hillbrow beat, and strangely, there is a striking resemblance to our very own Moths Tubby Webster and Kelvin Jensen. Scary!